1999 Ford Power Plant Fire & Explosion Investigation (Dearborn, Michigan)  -  This natural gas/coal dust explosion and fire resulted in 6 deaths and 38 injuries.  The cause was determined to be an unintentional open gas valve, allowing natural gas to enter a boiler during a shutdown operation.  The boiler burst at its seams during the initial explosion and ignited lofted coal dust (see NFPA Journal article, July/Aug 2004 - link available under Publications).

Process Building Explosion Investigation (Belvidere, IL, 12/09) -  This catastrophic explosion heavily damaged an industrial building and resulted in one fatality nearby. It was caused by the failure of a large, very high pressure vessel within. The investigation was conducted jointly with the Chemical Safety Board.

Sofa Superstore Fire Investigation (Charleston, SC, 6/07) - This fire involved a large commercial furniture showroom and warehouse, and resulted in the death of 9 firefighters (due to structural collapse). The investigation focused heavily on building/fire code issues.

Computer Fire  Model Simulation of a Fatal Apartment Fire - This model was constructed to examine smoke alarm response and toxic gas development during a fatal apartment fire, as well as in response to allegations regarding the point of origin.  Fire Dynamics Simulator (FDS)  model software was using during this analytical investigation

Time Sequence Explosion Test of Toy Caps Package (2000) - This testing program, conducted in western Colorado,  involved the bulk packaging of toy caps, and related to an accident where several deaths and injuries occurred in a plant in California in '97.  Several tests explored different product configurations.  An approximate TNT equivalency was determined. 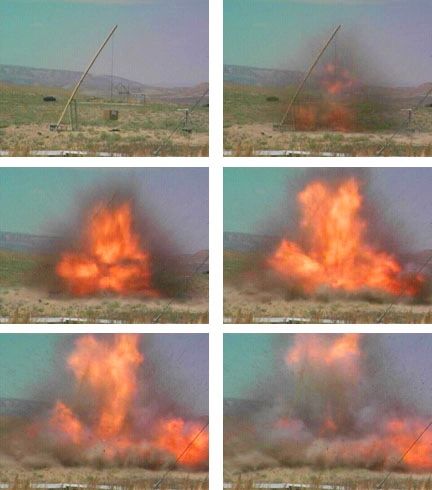 Example of Large Origin & Cause Investigation, During Scene Processing of a church fire (Sycamore, IL, 2/04)   - This fire/ explosion investigation involved one of the largest documented backdraft explosions, occurring in a church sanctuary.  The origin of the initial fire was found to be in an adjoining basement, caused by failure of church organ components. 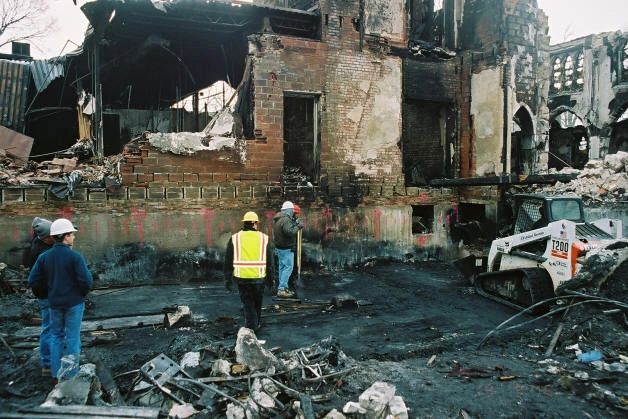 Fast food restaurant fire (1/20, south central Michigan) kitchen area after removal of debris. the origin of the fire was determined to be at a pressure fryer, which was taken as evidence and analyzed in a laboratory.